Skip to content
Cart
Now reading: Luxurious and functional watches adored by athletes
Share
PrevNext
Lightweight, waterproof but captivating watches are surely what athletes prefer to have on their wrists not only on sports courts but also on daily occasions. Here are several luxurious and functional watches that are adored by sports stars.
Worn by the world-champion high jumper Mutaz Essa Barshi, Richard Mille RM 67-02 is a great sports watch to be worn on court. As the lightest, skeletonized-winding movement automatic watch of the brand, this watch weighs simply 32 grams with the comfort strap introduced by them. The combination of TPT composite materials, grade 5 titanium, and the elastic wristband is used to produce the watch’s strap, ensuring the strap will not insert an extra weight. Water-resistant at 30 meters, the watch is not designed for water sports but is perfect for sports athletics.

(Photo Source: Superwatchman.com)
Released in 2021, the IWC Pilot chronograph 41mm was worn by Eileen Gu, the youngest Olympic champion skier at the 2022 Beijing Winter Olympic Games. The watch has a water resistance of 100m, and its dial is offered in either green or blue. With the user-friendly EasX-Change system, swapping the watch strap has become a breeze for watch owners. As mentioned by Eileen Gu, watches are crucial for skiers when they attempt to do double-corks. The IWC Pilot chronograph 41mm is therefore functional, refined, and classy for athletes. (Photo Source: IWC)
Omega Aqua Terra 150 M Co-Axial Master Chronometer 41 mm Ultra Light was found to appear on the wrists of several athletes at the 2020 Tokyo Olympics Games. Worn by three golfers Rory Mcllory, Sebastian Muñoz, and Guido Migliozzi while playing, the Aqua Terra Ultra Light version is admired because of its weight of 55 grams. It’s offered in blue, red, and green. Instead of being produced in heavy metal, the watch comprises two types of aluminum and a touch of titanium, entitling the first Omega watch with a titanium movement Caliber 8928 Ti. A photo of Rory Mcllory wearing the Omega Aqua Terra 150 M Co-Axial Master Chronometer 41 mm Ultra Light.
(Photo Source: Omega; Quill & Pad)
Inspired by the first version released in 2017, the 2021 Tudor Black Bay Chrono was worn by legendary footballer David Beckham. As a watch enthusiast and the brand’s ambassador, he was spotted wearing Tudor's watches on several occasions. Tudor Black Bay Chrono is discreet yet modern, offered in panda or reversed panda dials. With the use of an MT5813 Caliber and a water resistance of 200 meters, the watch is not only visually appealing but also has exceptional functionality and durability. The new version also comes with a slimmer steel case and does not feel too bulky. (Source: Tudor)
LeBron James, an NBA basketball player is spotted with Audemars Piguet Royal Oak Jumbo on his wrist in the Lakers-Suns Game in 2022. Audemars Piguet, one of the most recognized Swiss watch brands, is celebrating its 50th anniversary with the new Royal Oak collection. LeBron James’ Royal Oak Jumbo features an octagonal bezel in regal yellow gold, which symbolizes opulence and sumptuousness. The watch is also offered in pink gold with a gray dial, a steel bracelet with a blue dial, and a platinum bracelet with a smoked green dial. To guarantee better rate stability, accuracy, and timekeeping power, AP has devoted 5 years to developing the Caliber 7121 to replace the previous Caliber 2121. Equipped with a water resistance of 50m, Royal Oak remains to be a luxurious watch for sports lovers. 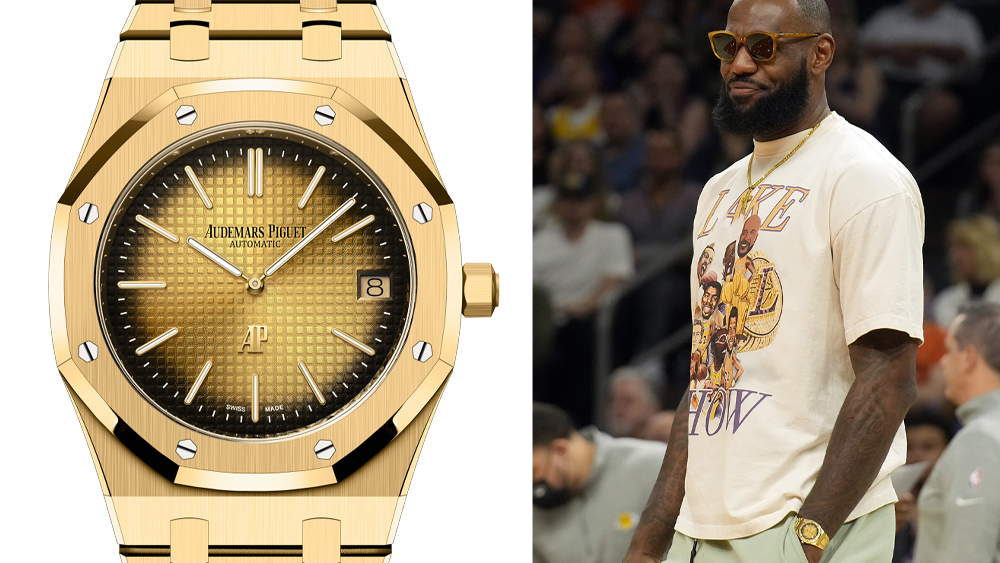 (Source: Robb Report)
Tag Heuer Link is adored by McLaughlin, an American sprinter who is also a record holder of the 400M hurdles in the Olympic Games. The 32mm watch dial is encircled by a bezel comprising 48 diamonds, displaying elegance and grace. Unlike other luxurious watches, Link is powered by a quartz movement which requires little care and maintenance. The water resistance at 100m makes this watch suitable for different occasions and any kind of sports. Sharing the same belief as the brand’s slogan “Don’t crack under pressure”, McLaughlin has become the brand ambassador of Tag Heuer. A collection of skeleton watches